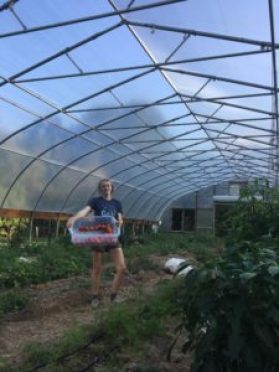 Hi! My name is Rosemary Cohen, and I’m originally from Washington, DC. I went to college in Pennsylvania at Haverford College. During the first few months of my first year at college, I was finding my community on campus–the women’s Ultimate Frisbee team, the Sneetches. A senior teammate of mine who I greatly admired and who had interned at High Rocks, was leading a fall break service trip to High Rocks. I signed up to go, thus beginning my journey with High Rocks, and sparking my ever-growing love for West Virginia.

Two years later, I received funding from Haverford College to come back to High Rocks in the summer of 2016 as a summer intern. I arrived in Pocahontas County and met the other interns, an incredible group of people, many of whom were alumni of High Rocks camps and programs. My intern group became very close, and we worked hard to contribute as much as we could to High Rocks in a few short months. At New Beginnings, I assisted in teaching a science class, accompanied our campers up the mountain on Hike Day, and played frisbee on the campground field, among many other things. At Camp Steele, I co-taught a course called Arts and Activism, harvested garlic, and hung out with my podlets.

For me, camp was full of contradictions. It was both exhausting and energizing as well as both too long and too short. I learned new things about myself, improved my creative and critical thinking skills, and learned quickly how to adapt to almost any situation. Camp was such an invaluable experience for me, and after the summer, I had a new direction in my life: working with young people.

On June 23rd, I turned twenty-one years old. Also on June 23rd, devastating floods hit West Virginia. At camp, we lost power and water. Around the state, including in Greenbrier and Nicholas Counties (where most of our campers lived), people were losing their houses and many people lost their lives. The floods directly affected most if not all of our campers. After New Beginnings ended, the Americorps at High Rocks (including me) were deployed to join national disaster response teams in hard-hit communities in White Sulphur Springs, Rainelle, and Richwood. We mucked houses, demo’d drywall, and sorted supplies for community members. Helping out with disaster relief showed me just how resilient West Virginians are, and how communities run so deep and strong in Appalachia. This was the work that called me to keep returning to West Virginia after the summer of 2016.

I returned that fall to lead the Haverford College fall break service trip, during which we worked on constructing the high tunnel at the High Rocks lodge. The next year, I visited High Rocks again to volunteer at High Rocks’ Martin Luther King Jr. Day Overnight, where I co-facilitated an anti-racist training, which I hope to do again this year.

Now, I’m settled into a cozy apartment in Pocahontas County, where I’m serving as an Americorps member at High Rocks. I split my time between High Rocks for Girls programming and programming at the Hub. And I’m over the moon to finally be living in West Virginia. I spend my free time hunting for fossils in the creekbeds of Pocahontas County, dancing Zumba at the Marlinton Community Wellness Center, and writing letters to my loved ones, most of whom are scattered across the east coast.

High Rocks is committed to providing a website that is accessible to our entire audience, regardless of ability.
We are actively working to improve our website's access by adhering to available standards for web content accessibility and use. If you have any feedback about how we can make our website more accessible or user friendly, please let us know.